The idea that actions are an important component of scene understanding in computer vision dates back at least to the '80s. In order to detect actions alongside objects the relationships between those objects needs to be discovered. For each action the roles of `subject' (active agent) and `object' (passive - whether thing or person) have to be identified. This information may be expressed as a `semantic network', which is the first useful output of a vision system for scene understanding. 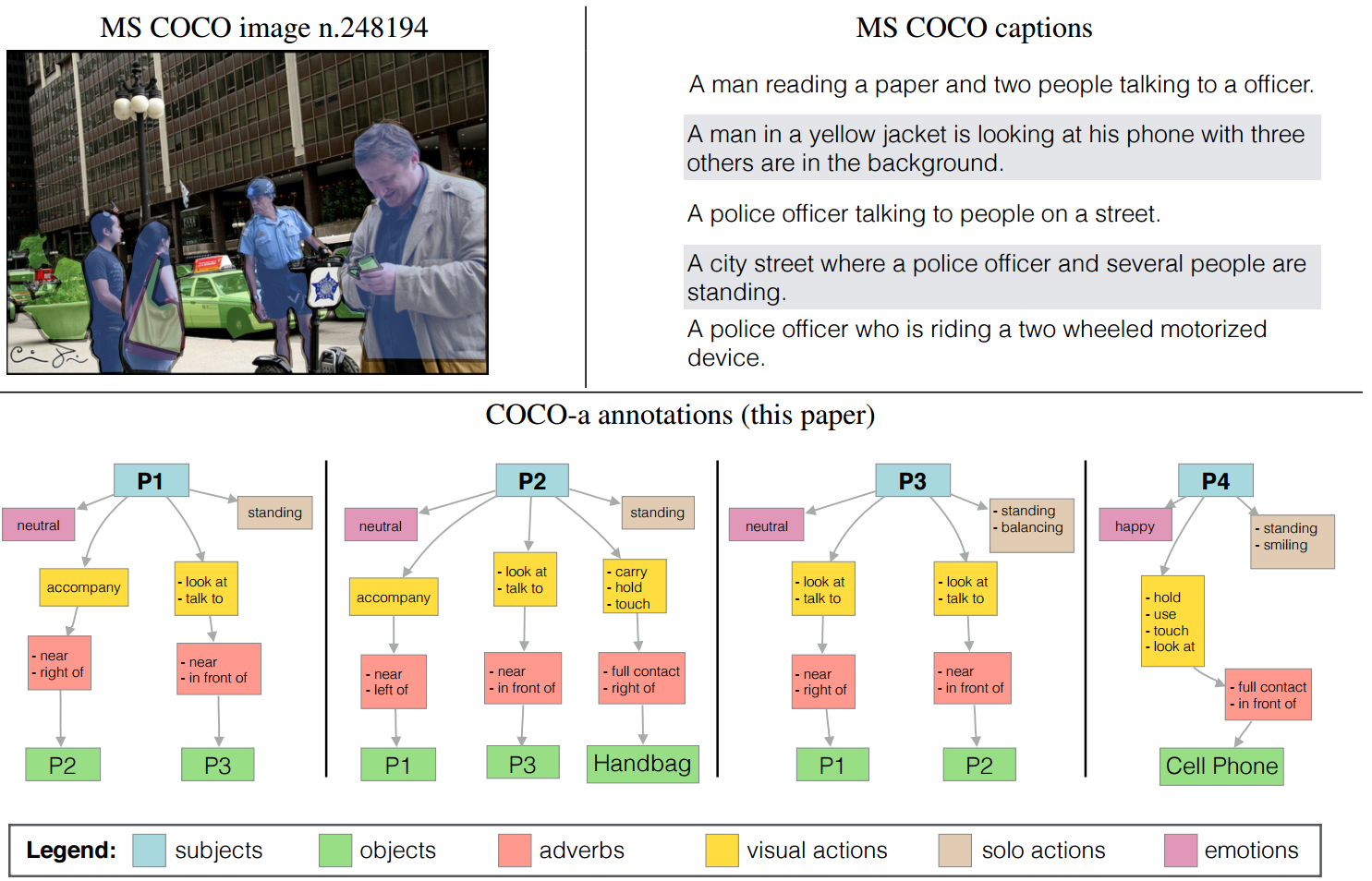 The ideal dataset to guide our next steps has four desiderata:

Current datasets do not measure up to one or more of these criteria. Our goal is to fill this gap.

In the present study we focus on actions that may be detected from single images (rather than video). We explore the visual actions that are present in the recently collected MS COCO image dataset. The MS COCO dataset is large, finely annotated and focussed on 81 commonly occurring objects and their typical surroundings.

We call visual action an action, state or occurrence that has a unique and unambiguous visual connotation, making it detectable and classifiable; i.e., lay down is a visual action, while relax is not. A visual action may be discriminable only from video data, multi-frame visual action such as open and close, or from monocular still images, single-frame visual action (simply visual action), such as stand, eat and play tennis. In order to label visual actions we will use the verbs that come readily to mind to a native English speaker, a concept akin to entry-level categorization for objects. Based on this criterion sometimes we prefer more general visual actions (e.g. play tennis) rather than the sports domain specific ones such as volley or serve, and drink rather than more specific motions such as lift a glass to the lips, other times more specific ones (e.g. shaking hands instead of more generally greet).

While taxonomization has been adopted as an adequate means of organizing object categories (e.g. animal → mammal → dog → dalmatian), and shallow taxonomies are indeed available for verbs in VerbNet, we are not interested in fine-grained categorization for the time being and do not believe that MS COCO would support it either. Thus, there are no taxonomies in our set of visual actions.

Our goal is to collect an unbiased dataset with a large amount of meaningful and detectable interactions involving human agents as subjects. We put together a process, exemplified in the Figure below, consisting of four steps. 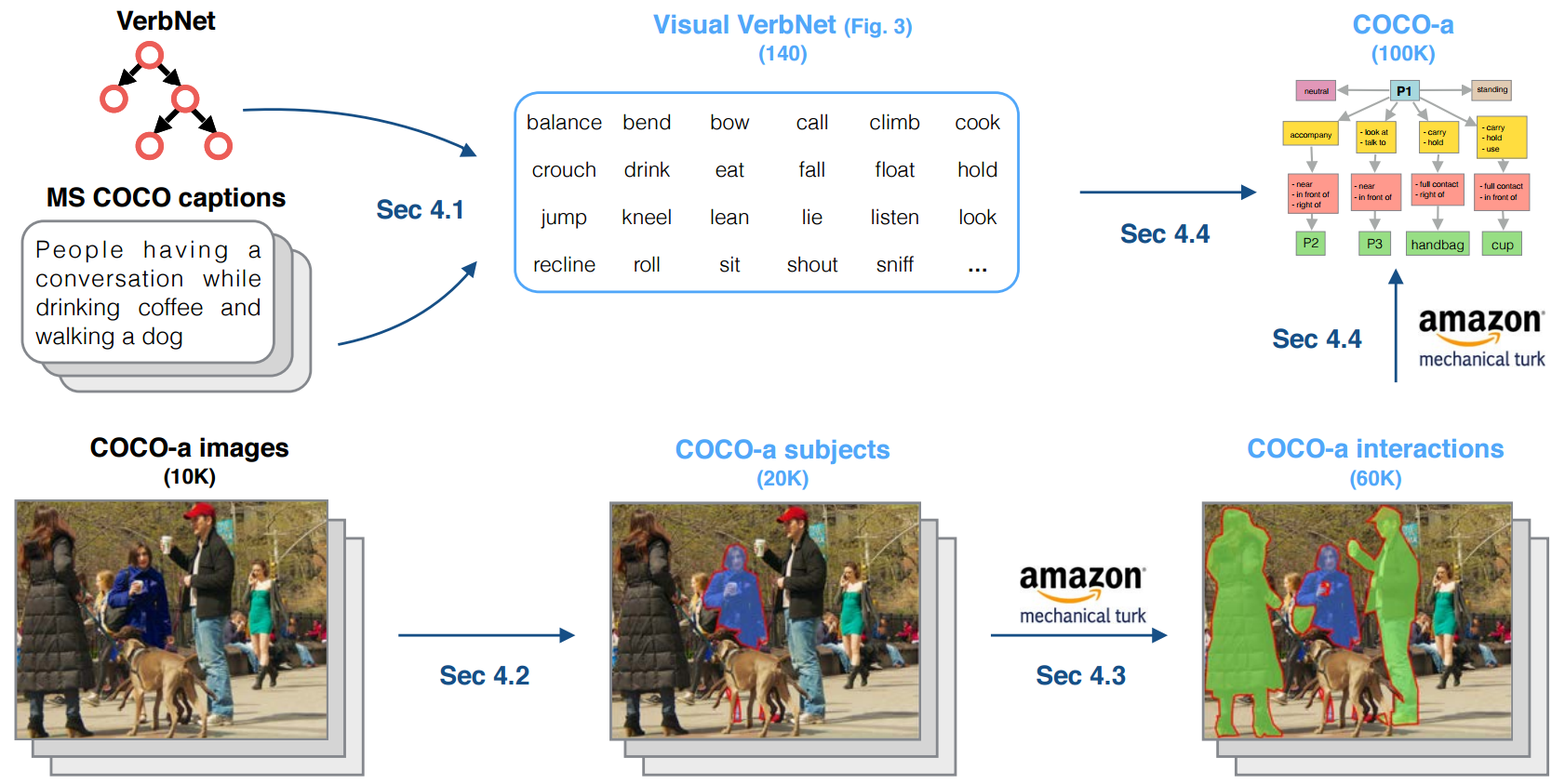 We obtained the list of common visual actions that are observed in everyday images, by a combined analysis of VerbNet and MS COCO captions. Our list, which we call Visual VerbNet attempts to include all actions that are visually discriminable. It avoids verb synonyms, actions that are specific to particular domains, and fine-grained actions. Unlike previous work, Visual VerbNet is not the result of experimenter’s idiosyncratic choices; rather, it is derived from linguistic analysis (VerbNet) and an existing large dataset of descriptions of everyday scenes (MS COCO Captions).

Different actions usually occur in different environments, so in order to balance the content of our dataset we selected an approximately equal number images of three types of scenes: sport, outdoor and indoor. We also selected images of various complexity, containing single subjects, small groups (2-4 subjects) and crowds (> 4 subjects). Next, we identified who is carrying out actions (the subjects), as all the people in an image whose pixel area is larger than 1600 pixels. All the people, regardless of size, are still considered as possible objects of an interaction.

For each subject we identified the objects that he/she is interacting with, based on the agreement of 3 out of 5 Amazon Mechanical Turk annotators asked to evaluate each image.

For each subject-object pair (and each single agent), we labelled all the possible actions and interactions involving that pair, along with high level visual cues such as emotion and posture of the subject, and spatial relationship and distance with the object of interaction (when present). We asked 3 annotators to select all the visual actions and adverbs that describe each subjet-object interaction pair. In some cases annotators interpreted interactions differently, but still correctly, so we return all the visual actions collected for each interaction along with the value of agreement of the annotators, rather than forcing a deterministic, but arbitrary, ground truth.

We show the 29 objects that people interact with (left) and the 31 visual actions that people perform (right) in the COCO-a dataset, having more than 100 occurrences. The human-centric nature of our dataset is confirmed by the fact that the most frequent object of interaction is other persons, an order of magnitude more than the other objects. Since our dataset contains an equal number of sports, outdoor and indoor scenes, the list of objects is heterogeneous and contains objects that can be found in all environments. It appears that the visual actions list has a very long tail, which leads to the observation that MS COCO dataset is sufficient for a thorough representation and study of about 20 to 30 visual actions. The most frequent visual action in our dataset is ‘be with’. This is a very particular visual action as annotators use it to specify when people belong to the same group. Common images often contain multiple people involved in different group actions, and this annotation can provide insights in learning concepts such as the difference between proximity and interaction – i.e. two people back to back are probably not part of the same group although spatially close.

The COCO-a dataset contains a rich set of annotations. We provide two examples of the information that can be extracted and explored, for an object and a visual action contained in the dataset. The figure below on the left describes interactions between people. We list the most frequent visual actions that people perform together, postures that are held, distances of interaction and locations. A similar analysis can be carried out for the visual action touch, (on the right).

To explore the expressive power of our annotations we decided to query rare types of interactions and visualize the images retrieved. The figure below shows the result of querying our dataset for visual actions with rare emotion, posture, position or location combinations. The format of the annotations allows to query for images by specifying at the same time multiple properties of the interactions and their combinations, making them particularly suited for the training of image retrieval systems.

Click here to request the credentials for the latest Coco-a version, and to receive all the updates on the status of the Dataset.